At long last I'm finishing up my 2018 COMC pickups with my favorites--my PC guys from the 2008 draft class!  It's this here blog's answer to GCRL:  Henne, Hart, Manningham, Long: 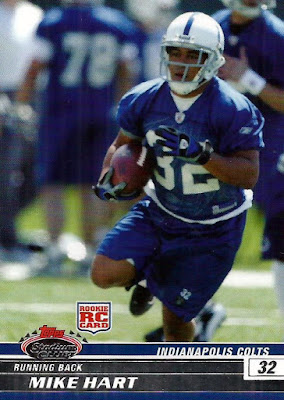 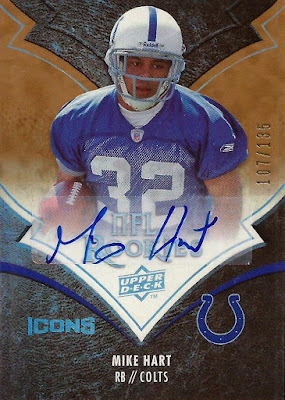 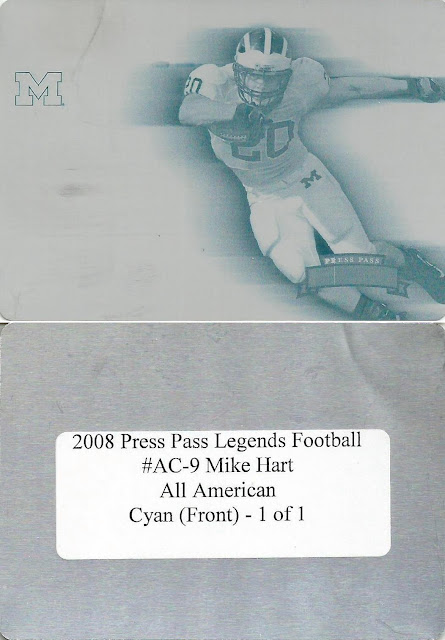 Record-setting RB Mike Hart is up first with a fun little trifecta.  His Stadium Club RC (#1799/1799!) leaves me just his '08 Upper Deck base short of his first-year run.  Next is a Rainbow parallel of his 2008 UD Icons auto, which looks to be my 64th card featuring his signature.  That product has a design I don't terribly care for but I love adding any new autograph of Hart.  And finally, I came up with a first for his collection:  a printing plate!  It happens to be a Michigan uni card, too, since it's from 2008 Press Pass Legends.  That's 1/1 #119 in my collection! 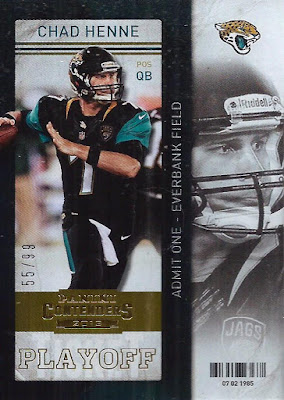 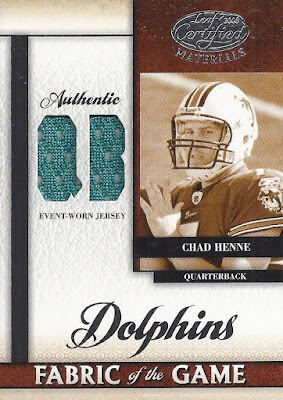 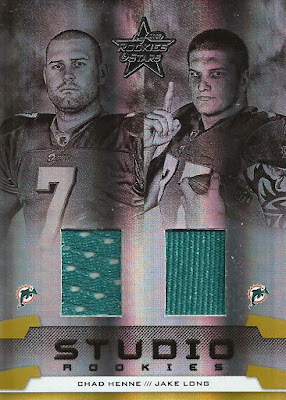 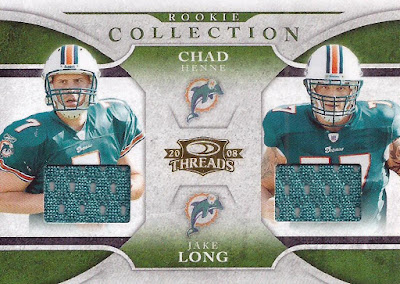 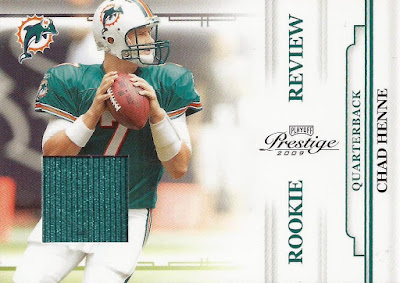 Now let's look at the Chad Henne pyramid of greatness--look out, Ron Swanson!  While I'd recommend more daily servings of autographs there's plenty here for a healthy collection.  Up top is another great example of Contenders' Playoff Ticket insert I enjoy so much.  A couple solo jersey relics from 2008 Leaf Certified Materials (#d /100) and 2009 Prestige bookend two more that include Chad's fellow '08 Wolverine draftee with the Dolphins, who's coming up next.  Those are #d /250 and /500, respectively.  Henne continues to rule the football collection with 124 hits and is getting close to joining 300-card PC guy Charles Woodson with a new total of 290. 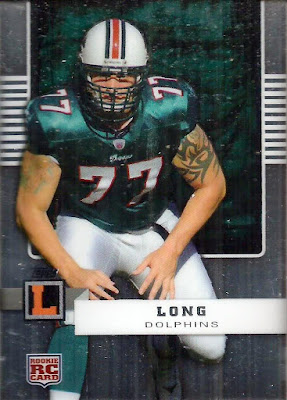 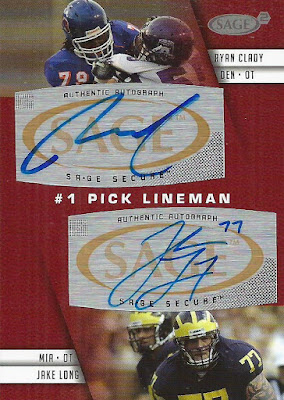 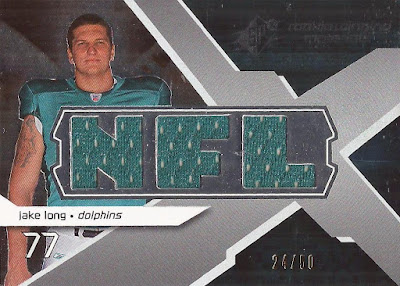 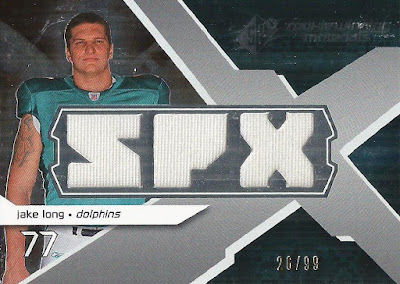 Former #1 overall pick OT Jake Long gets a double-dip with his own group of cards in addition to the pair he shares with Henne above.  He joins Hart in the RC club with his 2008 Topps Letterman base (#104/419), and I appear to be four cards short of Jake's first-years.  I also added a new signature of his (Michigan uni!) thanks to 2008 SAGE Squared, a card he shares with fellow first-rounder Ryan Clady, who went 12th overall to Denver after a good career at Boise State, then enjoyed a solid NFL run cut short by injuries (sounds kind of familiar!).  To those I added a pair of SPx triple jersey relics, giving me nine of his cards from that product featuring many such variations.

This haul moved Long back ahead of Braylon Edwards with 82 hits as the fourth player to hit 80+, leaving him three shy of the next guy you'll see. 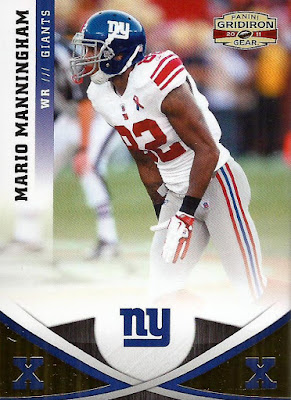 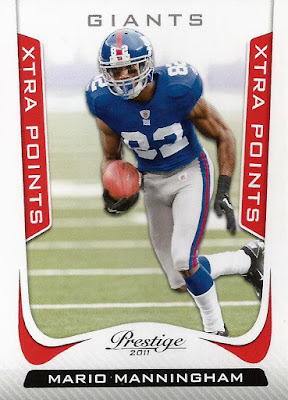 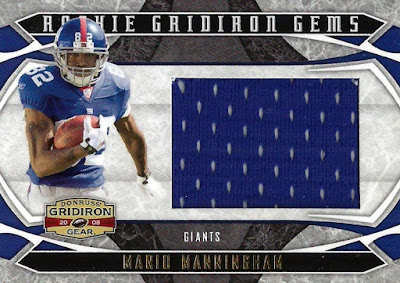 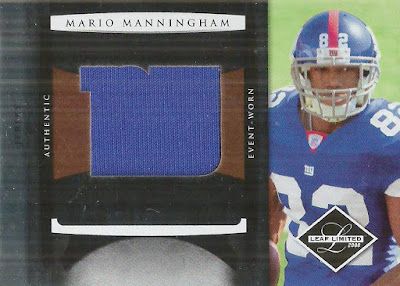 You may have heard of him.  Michigan star WR?  Super Bowl hero?  Namesake of this here blog?  Back in January I posted some Sportlots pickups that had me celebrating 200 Many Manninghams, and now I have a few more to add to that pile.  First is a pair of pretty Panini parallels (say that three times fast!):  2011 Gridiron Gear Gold X's (#068/100) and Prestige Xtra Points Red (#046/100).  I love any new Manninghams but I'm extra happy to add some numbered inserts.

Along with those is a new pair of Giants jersey relics.  The first is the Jumbo Swatch version of his 2008 Donruss Gridiron Gear relic, a piece that looks great and is numbered 16/50.  From the same year's Leaf Limited I found a Rookie Jumbo Jerseys Team Logo swatch (#18/50) cut in the shape of New York's logo.  Well, a rough outline, anyway!

Manningham's 85 hits are good for second place, though he's a crazy 29 behind top guy Chad Henne, meaning I can't say I have too many!

Now that I'm finally done with these, some show pickups and trade packages should come next.
Posted by Dennis at 8:36 PM

My other blog: Tigers, baseball, set-building, and general collecting

Jeff's blog: (White Sox, vintage, and other PCs) and tumblr

Leaders and Best (other favorite blogs)